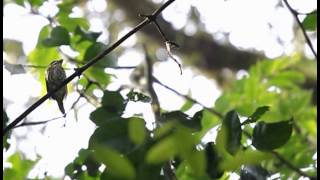 There are just four species of broadbill in Africa, three of which are in the genus Smithornis. Unlike many other species in the family Eurylaimidae, Smithornis lack bright coloration, but alert us to their presence with the loud mechanical sound they produce during their elliptical flight display. With Chris Clark (UCR) and Rick Prum (Yale), we explored the mechanism that produces the sound, using a combination of high-speed video, audio analyses, wind tunnel experiments, an